Road hazards are one of the leading causes of motorcycle accidents across the state and throughout the entire country. Loose gravel, oil slicks, potholes, and other obstacles can quickly cause motorcyclists to lose control of their vehicles. Quite often, these obstacles are unnoticeable until it is too late.
One way motorcyclists can try to protect themselves against road hazards is by having good tires with a strong grip. This will help provide traction while maneuvering over the unsafe areas of the road. Watching your speed and trying to avoid any major hazards when possible further ensures your safety. Wear helmets and protective gear that provides a clear line of vision ahead, allowing you to slow down when needed to avoid rough or unsafe areas.

Driving While Under The Influence Of Drugs Or Alcohol

Over one-third of all motorcycle accidents involve a driver who is under the influence of drugs or alcohol. Driving while impaired makes it increasingly difficult to control a vehicle, as individuals often have delayed reaction times and clouded judgments. They may see motorcyclists too late and be unable to respond due to their impairment. This situation is extremely dangerous for all drivers on the road.
Being in control of a vehicle is something that needs to be done with a clear mind. Anything can happen on the roadway, prompting an instant response that may very well save your life. If you are injured by an individual who is driving under the influence of drugs or alcohol, it is crucial to contact Siegfried & Jensen. You may be able to recover compensation for your damages as well as punitive damages due to the driver’s conduct. 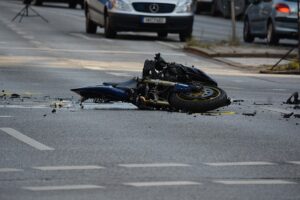 Rain can make roadways extremely slick to travel on. Driving on a slick surface is difficult for any vehicle, but motorcycle drivers, in particular, have a more difficult time controlling their vehicles on these unsafe surfaces.
Not only do slippery roadways contribute to accidents, but heavy rain and foggy conditions can make it extremely difficult to see. Having ample lighting on your motorcycle can aid other vehicles in spotting you during these times. Although it may not seem ideal to be caught out in the rain for an extended period, slowing down while traveling in heavy rain is one way you can help ensure you and others remain safe on the roads.

Individuals who are involved in motorcycle accidents are at far greater risk of sustaining serious, life-threatening injuries. Although motorcyclists wear helmets and safety vests to protect them on the roadways, most of their safety equipment is no match for a vehicle weighing several thousand pounds.
Motorcycle accident victims’ injuries are often considered more severe in nature and require immediate medical attention in most cases. Some of the most common injuries sustained in motorcycle accidents include:

Motorcycle accidents often result in life-changing injuries. Dealing with insurance companies and legal proceedings while trying to recover can be overwhelming and seemingly impossible. At Siegfried & Jensen, we are here to protect your legal rights so you can focus on recovering.
We work diligently to help motorcyclists recover compensation for injuries sustained in accidents and to cover other damages. Some of the most common awards we help motorcyclists recover include:

In an ideal situation, insurance companies would willingly step in and take care of the victims’ needs. Unfortunately, this is far from reality. Instead, insurance companies do everything in their power to avoid paying a fair and full amount of restitution to injured victims. Some companies even try to take advantage of injured motorcyclists by offering small, quick settlements to avoid legal proceedings.
Agreeing to this payment can jeopardize an injured motorcyclist’s chances of recovering adequate compensation in the future. Contact a motorcycle accident attorney from Siegfried & Jensen to protect your legal rights today.