Motorists who are driving while intoxicated have a great chance of being involved in a car crash than a sober driver. This is largely due to the effects of alcohol on a driver’s ability to operate their vehicle, be aware and track their surroundings, and respond properly to conditions in their environment. In fact, drunk driving is so risky that every 51 minutes someone dies in an accident involving a drunk driver. 1 in 3 people have admitted to being involved in a collision with an intoxicated motorist at some point in their life. It important to protect your legal rights after a collision with a drunk driver.
Who is responsible when a drunk driver causes a car accident resulting in the injury or death of another person? There are a few different parties that could be held liable for injuries or deaths that happen in a drunk driving crash. Let’s take a look at how some of these parties can be held responsible. 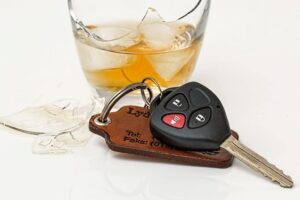 Often an intoxicated motorist drinks an alcoholic beverage before operating a vehicle, whether it is at a bar, restaurant, or another public area. In certain drunk driving related crashes, the vendor who supplied the driver with alcohol can be held responsible for the injuries of the victim.
In Utah, there are laws that hold alcohol vendors legally liable which are known as dram shop laws. These regulations mean that the vendor can be held legally responsible if the drunk driver was underage and was already noticeably intoxicated at the time they were served alcohol.
For example, imagine that a bartender chooses to continue serving alcohol to a 17-year-old who is speaking incoherently and unable to walk. The 17-year-old then exits the bar and gets into a crash when driving home, resulting in injuries to another involved driver. The bar itself could be held responsible for the injuries of the victim in this case because the bartender chose to continue serving alcohol to an underage drinker who was notably intoxicated.
Keep in mind that the law only holds a vendor liable if they serve alcohol to minors. Regarding the provided example, the vendor would not be responsible if the driver was over the age of 21, even if they were extremely intoxicated at the time they were being served at the bar.
It is often difficult to hold a vendor liable for drunk driving crashes. A lawyer would have to conduct an investigation in order to find out the location of the at-fault driver before getting into a crash. After this, evidence would have to be gathered that provides proof the minor was noticeably intoxicated at the time they were being served alcohol by the vendor. In order to hold the vendor responsible, it is crucial that you partner with a qualified personal injury lawyer.

It isn’t just bars and restaurants that serve people alcohol. Many times, drunk drivers may have consumed alcoholic drinks on someone’s private property before operating a vehicle. When someone is serving alcohol in a private setting, they are considered a social host, and sometimes the social host can be held responsible for injuries resulting from drunk driving crashes.
In Utah, dram shop laws are similar to regulations provided for social host laws. A social host can be held responsible if they knowingly serve alcohol to a minor. For example, imagine a family friend serves a 16-year-old minor alcohol, knowing completely that it is not legal. After this, the 16-year-old gets into a crash when driving home, seriously injuring a passenger in the other car. The family friend can be held responsible for the injuries resulting from the crash since he or she was aware that the driver who was served alcohol was a minor. Social host laws are different from dram shop laws in that they do not focus on the drunk motorist being noticeably intoxicated when they were served alcohol. This can result in the social being held responsible even if the minor did not outwardly show any signs of intoxication when being served.

The drunk motorist who caused the crash is usually held responsible for the victim’s injuries involving car accident claims. This is due to personal injury law stating that, when a person is harmed due to another person’s recklessness, the victim is able to hold the negligent party responsible.
As far as the law is concerned, negligence involves the defendant breaching a duty of care that was owed to the victim. There is a legal obligation of every driver on the road to fulfilling a duty of care to others on the road. This means driving safely in order to prevent crashes. A driver fails to live up to this duty of care, or fails to fulfill this legal obligation, when they are driving under the influence of alcohol. Driving intoxicated is a very negligent action, leaving the victim able to file a personal injury claim against an intoxicated driver. If the at-fault driver has auto insurance, the insurer will probably handle the claim and be liable for providing the victim with financial compensation.

Across the United States, an average of 28 people are killed every day due to drunk car accidents. Driving under the influence of drugs or alcohol is a negligent action, which allows victims to take legal action against at-fault drivers for their injuries. In some cases, victims can contact an experienced drunk driving car crash attorney in Salt Lake City to get the justice they deserve.
The qualified Utah personal injury attorneys at Siegfried & Jensen believe in holding negligent drivers responsible for their actions. When someone drinks alcohol and gets behind the wheel, they are putting themselves and others on the roadway in danger. Our experienced personal injury lawyers are dedicated to helping victims get the justice they deserve after the loss of a loved one or family member. If you or a loved one has been harmed in a drunk driving crash, please contact our offices at (801) 845-9000 to discuss your case today.