The next time you cruise by someone who is using their cell phone while they are driving before you mutter under your breath that they need to put their phone away take a moment and consider if you have ever taken a bite of a cheeseburger or wrangled a latte while you were behind the wheel.
According to reports from the National Highway Traffic Safety Administration, eating causes more distractions while behind the wheel than using a cell phone to make a call or send a text.
Surely this information is wrong. This flies in the face of every soccer mom’s weekly routine. Every morning commuter who battles rush hour on their way into the office. Every summer cross-country road trip. Every weary trucker. Everyone.
Eating in the car is practically a national past time. With no shortage of drive-thrus, eating behind the wheel has become an accepted form of dining. Most people would view eating while driving as a necessity, a legitimate means of consuming a meal. You think the only thing it is distracting you from is hunger, right?  Yet very few people have probably ever stopped to contemplate if we might be placing ourselves and our passengers in mortal peril as we zoom down the highway in an SUV with half a youth soccer team in the back, cramming yet another fistful of french fries into our mouths. 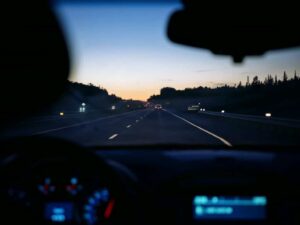 How Bad Is Eating Behind the Wheel?

Data that has been compiled by the National Highway Traffic Safety Administration estimates that eating while driving raises your odds of being involved in a crash by as much as 80%. A gripping 65% of near-miss collisions are due to drivers whose focus is not on the road because they were drinking or eating.
With these facts in mind, eating in our cars seems like more of an epidemic than a past time. The consumption of fast-food and the convenience of the drive-thru is so firmly rooted in American culture that we even a national holiday to celebrate it. July 24th is National Drive-Thru Day. It is also National Tequila Day. Make of that what you will.
Here are some alarming facts:

Why Eating Behind the Wheel Is So Distracting

There are many different reasons why eating while you are driving is so hazardous. One primary reason is that when you attempt to eat while you are driving you are engaging in some serious multitasking, a task at which most people feel they excel but humans were not actually designed to do.
Two Hands – There is virtually no way to eat while you are driving that allows you to keep both of your hands on the wheel and both of your eyes on the road. At least one of each must be sacrificed to the activity at hand. Your food items will need to be opened or unwrapped, you need to open the sauce for your Chicken McNuggets and the ketchup for your fries, clean up the pickle that just fell out of the back of your burger, get the crumbs off of your shirt, try to contain the trash… Oh, yeah, and steer the car too.
Eyes Off the Road – Anything that requires you to take your hands off of the steering wheel while you are driving is probably going to cause you to take your eyes away from the road at some point also. You need to look away from the road to get the straw into your drink. The small human in the back seat can’t open its own ketchup packets and is freaking out because there are pickles on the burger. You asked for no pickles, didn’t you? Hurry up so your food is at least still warm when you eat it. Where did those napkins get to?
Your mind isn’t on the road at all…
With your focus 100% off of the road, you will not have the chance to notice another driver changing lanes, warning signs, suddenly stopped traffic on the road ahead or other drivers who can’t find their napkins either.
Slower Reaction Times – With the whole of your cerebral processing off the road and on the ketchup packets, your reaction time is going to be considerably slower. This increases your odds for being involved in a traffic collision since it decreases the likelihood of you being able to react in time to changes around you, thereby helping you avoid a traffic accident.
One university study discovered that the average reaction time of drivers who were also eating decreased by more than 40% as opposed to the drivers who chose to pass on the Frosty and Baconator.
Distracted driving in any form also decreased the reaction times of younger drivers so much, that they were now equivalent with the reaction times of a 70-year-old.

So Now You Know

The issue of food causing distracted driving is one that is easily dealt with, as is not engaging in any form of distracted driving. It’s going to be a hard habit to break but anything you do that stops you eating while you are driving is helpful. It could be an adjustment to your daily routine as minor as getting up ten minutes earlier so that you have time to eat your Sausage McMuffin in the parking lot before you pull out onto the road. It may take some getting used to but it could also save someone’s life.
You should also strive to be an attentive passenger. Do what you can to help so that the driver can keep his eyes and his focus on the road ahead.