Sure by now you have heard someone refer to traffic as being “bumper to bumper.” Unfortunately, riding bumper to bumper is extremely dangerous, especially when it is done at high speeds. When it comes to driving safely on the roadways with others, it is imperative to provide enough space between your vehicle and those ahead of you. Driving too closely behind other vehicles does not provide you with enough space to brake safely in an emergency. Not being able to respond quickly enough can result in a collision that causes serious injuries.
In Utah, victims who are harmed in car accidents caused by vehicles following too closely may be entitled to compensation for their damages, including lost wages, medical expenses, property damage, and pain and suffering.
If you have been injured in a car accident caused by a reckless driver and would like more information regarding your legal rights, contact Siegfried & Jensen to speak with a reputable personal injury attorney as soon as possible. Our attorneys have been helping accident victims since 1990 to get the compensation and justice they deserve. 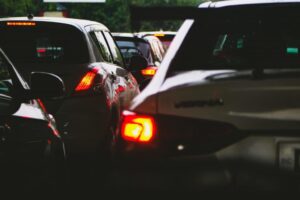 Tailgating is a term used to describe the act of driving too closely to the vehicle ahead of you on the roadway. The short distance between vehicles places those on the road at an increased risk of being involved in a car accident. This is particularly true in instances where a vehicle stops suddenly to avoid something in the roadway. Vehicles following too closely do not have enough time to stop their vehicles, which often results in them crashing into the rear-end of the vehicles they are tailgating.  Due to the nature of this incident, tailgating is considered a traffic violation, so drivers who cause accidents by following too closely are often cited and fined for their actions.

Why Do Drivers Tailgate?

Tailgating is an extremely dangerous and illegal habit. Despite the risks of an accident or being fined, many drivers continue to engage in this reckless behavior. There are many reasons for which individuals tailgate. Some of the most common include:
Road Rage: Drivers who become angry at other drivers on the road may tailgate. These negligent drivers do so to take out their anger and intimidate others.
Drivers Are In A Hurry: Drivers who are in a hurry to their destination often feel “stuck” behind slow drivers on the roadway. Instead of trying to pass them, drivers will follow behind them very closely in an attempt to force the other driver to speed up or to move out of the way.
Distracted Driving: Individuals who are distracted while driving, whether they are messing with the radio or GPS, talking to others, or using their cell phone, may not realize how close they are following the vehicle ahead of them.
Careless Or Inexperienced Drivers: Some drivers engage in tailgating simply because they are extremely careless or inexperienced on the road. They may misjudge the space between their vehicles and the one ahead of them, which results in following too closely.
Trying To Prevent Other Vehicles From Cutting In Front Of Them Or Merging: Some drivers will intentionally tailgate to prevent other vehicles from cutting them off or merging in front of them.
If you are ever injured in a car accident caused by a driver tailgating, it is imperative to contact a personal injury attorney as soon as possible. You may be able to hold the at-fault driver liable for your injuries, medical expenses, lost wages, and other damages incurred in your accident.

One of the best ways to avoid being involved in a tailgating accident is by not engaging in the behavior yourself. You should keep your distance from the vehicle ahead of you at all time to ensure you have enough time to stop your vehicle in the event of an emergency.
One of the best ways to ensure your vehicle is not following too closely is by following the two-second rule. The two-second rule is applied by finding a fixed object or point on the side of the road. As soon as the rear bumper of the vehicle ahead of you passes the point, begin counting. If you do not reach two before your front end passes the same fixed point, you are following too closely and need to slow down.
If you notice other vehicles on the roadway tailgating, try to stay away from them if possible. If they are tailgating another vehicle on the roadway, it is nearly guaranteed that they will engage in the same behavior behind you. If possible, switch lanes and get away from their vehicle to ensure you and your passengers remain safe.
If you are ever injured in a car accident caused by a tailgater, it is imperative to contact a personal injury attorney as soon as possible. You may be legally entitled to compensation for your damages, but the state has a strict statute of limitations. You will need to file your lawsuit with the required time in order to have your lawsuit go forward.

A Utah Car Accident Attorney Can Help You

If you were injured in a car accident, by no fault of your own, it is important to call a personal injury attorney as soon as possible. You may be entitled to compensation for your injuries and damages. Attorneys at Siegfried & Jensen have over 30-years of experience helping accident victims obtain remuneration for damages like medical expenses, lost wages, pain, and suffering, and more.
Our team of attorneys has extensive experiencing helping accident victims obtain compensation and justice they deserve. Since 1990, our law firm has helped over 35,000 accident victims obtain $850 million in damages for their claims.
If you were injured in a car accident caused by a reckless or negligent driver, contact our law firm today at (801) 845-9000. Schedule a free case evaluation at one of one conveniently located offices so you can see what legal options are available for your case.