Have you ever been pulled over for talking on your cell phone? Is talking on the phone while driving considered distracted driving in Utah? There is a reason behind law enforcement’s strict policies regarding cell phone use. It can be very unsafe.
Of course, everyone knows it is dangerous to use a cellphone while driving a vehicle and that it increases your risk of injury. If someone who is driving while distracted hits you and causes an accident, they can create injuries that make you end up with a huge amount of pain and suffering, or even cause death. If you are involved in such an accident, call a lawyer such as Siegfried & Jensen to gain the compensation you deserve.
However, unfortunately lawmakers in Utah have been disinclined to make each form of distracted driving a primary offense. So for now, if you use your hands while talking on the phone and driving it is considered a secondary offense. This means that in Utah, the police can not pull you over when you are engaged in this activity – unless you cause a crash or are swerving in and out of different lanes.
So what does the law actually say? Is talking on the phone while driving considered distracted driving in Utah?
Many experts agree that driving while using a cellphone is similar to driving with a blood alcohol content of 0.08 percent. It definitely increases your risk of a car crash – by four times!
Utah had 5,748 distracted-driver crashes in 2016 causing 3,303 injuries and 27 deaths.About 9 percent of all crashes in Utah over the past decade has involved a distracted driver.
In Utah, lawmakers were trying to advocate for a “Hands Free Cell Phone Bill.”The bill was supposed to make it illegal to use your hands to answer phone calls while driving, making it a primary offense instead of the secondary offense it is right now. Lawmakers said this would help reduce the number of car accidents in Salt Lake City and all across Utah. But the law did not pass.

Why Using a Cellphone and Driving is Unsafe 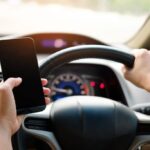 Distracted driving is extremely unsafe. Using a cellphone while driving can cause three types of distractions: Manual distractions, cognitive distractions, and visual distractions.
When the driver takes one or both hands off the wheel it is called a manual distraction. Common examples include eating and drinking in the car while driving, fiddling with the GPS, and of course answering or texting on your phone.
Cognitive distraction takes place when the driver’s mind isn’t focused on the task at hand. Chatting on the phone or even listening to a favorite podcast or radio station causes risk. You need to pay attention to what you are doing – what if someones pulls out in front of you and you don’t notice?
Visual distraction is when a driver watches anything other than the road in front of them. Yelling at the kids or reaching for something in the back seat can cause this kind of distraction.
Distracted driving laws in Utah prohibit other uses of cellphones while driving, not just texting and sending emails. It is now illegal to use a cellphone in any way except for GPS apps or hands-free voice talking while driving. But talking on the phone while using your hands is only a secondary offense.
Of course, Utah’s distracted driving laws have changed over the years. In 2007, lawmakers in Utah prohibited the use of handheld phones while driving, but violators could be punished only if they caused a traffic violation. In 2009, Utah lawmakers made it illegal to text and send emails in the car while driving at any time.
It is now illegal for motorists to hold a phone to your ear on a phone call while driving a vehicle in Utah. But as stated above it is classified as a secondary offense. Meaning: The police can’t pull you over unless you cause a car accident or driving erratically, such as weaving between lanes.
Unfortunately cellphones and distracted driving still contribute to numerous car crashes across the United States each year. So what do Utah lawmakers plan to do about it? Will lawmakers make it illegal? Will talking on the phone now be a primary offense?
Well, the existing distracted driving law in Utah was up for debate earlier this year, but lawmakers in Salt Lake City stopped the bill that would make motorists using their hands to answer phone calls while operating an automobile a primary traffic offense. The House Transportation Committee voted 3-5 against the “hands-free cellphone bill.”
So, at this point, there is nothing police in Utah can do if they see a driver answering a phone with his/her hands. As well, it is legal to use a headset while driving in Utah. But of course, the safest course of action is for the driver to pull over or get off the road to use the phone.
Texting and driving in Utah is always illegal. The texting and driving law in Utah is extremely strict. It is considered a primary law, which means a cop can pull you over if they see you texting while driving, even if you are not committing any other kind of moving violation.
Fines and penalties include a fine of $750 and up to three months in jail for texting and driving – considered a misdemeanor. If there is an injury or death involved, the fine is up to $10,000, and up to 15 years in prison – considered a felony.
There are some exceptions to the texting and driving law. These are if you are reporting or requesting assistance regarding to a safety hazard, a medical emergency, reporting or requesting assistance because of a criminal activity, and texting emergency services personnel or law enforcement officers.

Distracted driving causes many accidents and injuries. Being injured in an auto collision is a horrible experience, but you can get through it. Let Siegfried & Jensenhelp get you the justice and compensation you deserve. Call (801) 598-1218.