What Is Red Light Running?

If a car enters an intersection right after a traffic light has changed to red, the driver has committed a violation of the rules of the road. Drivers are — for some reason — in an intersection when the signal changes, such as those who are waiting to take a left-hand turn, are not considered red-light runners. In locations where drivers are allowed to make a right turn on red, motorists who do not come to a full stop before turning could be considered as red-light runners. Violations also include drivers who are turning right on red at an intersection when they are not allowed to do so.
Some studies that were conducted for many months at busy intersections across the United States before the implementation of red light cameras, found that the normal driver would run a red light every 20 minutes at a traffic signal. Red-light running was even more common during peak travel times. When analyzing data from 19 separate intersections that did not have red-light cameras, the violation rate was found to be 3.2 per hour at each intersection.

Who Primarily Runs a Red Light?

The AAA Foundation for Traffic Safety administered a survey by phone back in 2017 that found 93 percent of motorists said it was unacceptable to run a red light if they were able to stop safely. However, 43 percent reported that they had run a red light in the last 30 days. When looking at drivers who were involved in deadly red-light crashes in 2017, the drivers who ran the lights were usually male, young, and involved in previous crashes or alcohol-related accidents. The red light runners were also more likely to have been speeding of intoxicated at the time of the collision and less likely to carry a valid driver’s license. 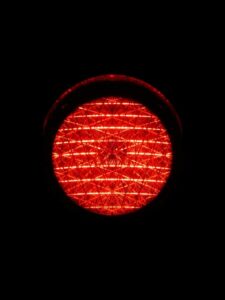 If you get a red light or stop sign ticket in the state of Utah, you will probably have to pay a fine and demerit points assess regarding your driving record. Now, we are going to take a closer look at what is prohibited under and the law as well as the possible consequences of a stop sign or red light violation in the state.

Certain traffic signals are triggered by a switch after a sensor detects the presence of a car that is waiting at a red light, but these sensors do not always detect motorcycles, mopeds, and bicycles due to their size. When a person driving one of these vehicles is ticketed, they can possibly establish a defense by showing that:

Fines and Points for Violations

Stop sign and red light violations are infractions in the state of Utah. Usually, the fine for a conviction is around $120. IN most cases, a stop sign or light conviction will add 50 demerit points to a driver’s record. When a driver has 200 or more points within a three-year timeframe, they will face a suspension of their license. However, eligible drivers can possibly remove 50 points from their record through the completion of a defensive driving course. Depending on the case, a red light or stop sign violation could result in a reckless driving conviction, and a motorist who runs a red light or stop sign and causes death could face automobile homicide charges under certain circumstances — such as illegal use of a cellphone or impairment on drugs or alcohol.

There were 890 people in car crashes caused by red-light runners in 2017, according to the Insurance Institute for Highway Safety (IIHS). Because of the risks associated with running red lights, cities and agencies have attempted measures to curb these accidents. Reports show that the installation of red-light cameras resulted in reducing the rate of red-light runners by nearly 21 percent. Still, these accidents continue to happen in Utah and the greater U.S. every day.
When someone is harmed in an accident within an intersection, they will likely sustain significant damages. These could include medical bills, emotional pain and suffering, and time off work. The recovery process is long and difficult, and when a victim can’t work, it makes it even harder. In some cases, victims may be able to regain lost compensation with the help of a qualified Salt Lake City red-light crash attorney.
Siegfried & Jensen has been helping the people of Utah for 30 years. We have recovered millions in settlements for our clients, and we want to help you. Give us a call today at 801-845-9000 to put us to work on your case.