When the airbags are deployed during a collision, it erupts from the dashboard at breakneck speeds. The airbag will also be very hot and covered with dust and chemicals that are used in the deployment process. There is no doubt that airbags can save lives and prevent many car crash injuries, but they have also been known to be the cause of injuries for both drivers and passengers.
Below we are going to talk about how airbags operate, things that can go wrong after deployment, and look into the nature of injury claims related to airbags.

How an Airbag Works 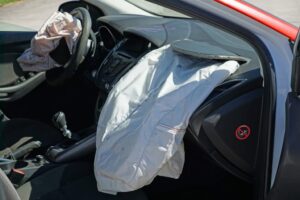 Airbags are created from light fabric. The steering wheel houses the driver’s airbag, and a panel on the dashboard houses the passenger’s. The driver’s side airbag is around the size of a beach ball when inflated, but the passenger’s airbag can be many times larger. This is largely due to the position of the passenger. They are further away from the dashboard, so it is necessary for it to be larger in order to properly protect the passenger. Some vehicles also have airbags located inside the doors of the vehicle. These are to provide further protection, especially in the case of a rollover accident.
A crash sensor deploys the airbag when the car is involved in a crash that is serious enough to trigger it. It could be due to a head-on crash or similar intensity collision. Generally, airbags are triggered in crashes at around 8-10 miles per hour.
In a particularly serious accident, the crash sensor triggers an igniter that produces gas, usually nitrogen or argon, which fills the airbag. The airbag only takes about 1/20th of a second to deploy fully, and this is why airbags come out at such rapid speeds. The airbag then automatically deflates, but deployment will often release certain types of dust and chemicals. These can potentially aggravate the eyes and skin.

What Can Go Wrong When an Airbag Deploys

A notable deployment issue involves a malfunction of the crash sensor itself. There are many things that could possibly go wrong:

The timing of airbag deployment is safety to its proper function. Even when the airbag deploys a microsecond too late, it could cause severe injury due to how close the head of the driver or passenger is to the airbag.

A crash sensor that is malfunctioning can cause extremely severe injuries, and sometimes even death. Deployment of an airbag can cause injury at any time. Some examples involve:

Even when an airbag deploys properly, it can still cause severe and sometimes deadly injuries if the front seat occupant is extremely close to the airbag at deployment. The National Highway Traffic Safety Administration (NHTSA) advises that drivers sit at a minimum of 10 inches from the steering wheel at all times.

Can I Sue for Injuries Suffered From an Airbag?

An airbag malfunction can give cause to a personal injury claim. To successfully file an injury claim, you and your attorney need to be able to provide evidence that some part of the airbag was defective at the time of its manufacture, or that the design of the airbag was unreasonably risky. This is known legally as product liability. Keep in mind that just because you sustained injuries after the deployment of an airbag – or maybe even its failure to deploy – it does not mean any party is liable for your damages.
You may find yourself asking: who is potentially liable for a product liability case? With airbag injury cases, they are usually three options:

What to Do If an Airbag Malfunctioned

It is crucial that you preserve evidence involving the airbag. Don’t let the airbag and its components, such as the crash sensor, be discarded after the incident. Ensure that the vehicle’s computer is not wiped after the crash and make sure that the insurance company does not scrap the car.
Usually, if the insurance company declares a vehicle to be a total loss after a crash, it will attempt to take possession of the vehicle. If possible, you should hold onto the car. This could be easier said than done, but keep in mind that during litigation it is the burden of the plaintiff to prove that the defendant was negligent. In a case involving an airbag injury, it would be hard to impossible to provide evidence of your case without the vehicle, its computer, or the airbag components.

Someone dies in the aftermath of a car crash every day. Nearly 22,000 people are injured every year in Utah. Sadly, these car accidents often leave victims with fatal injuries. In some cases, surviving family members are able to pursue compensation from the help of a Utah area wrongful death attorney.
For over 30 years, the skilled car crash lawyers in Salt Lake City at Siegfried & Jensen have been diligently working for the residents of Utah. If you or a loved one has been injured in a car crash due to no fault of their own, please contact us today for a free, no-obligation consultation to see what options there are for your case.