Being involved in an auto accident is an overwhelming experience. The stress and injuries surrounding an accident are often amplified when the accident involves a semi-truck. The size and weight of these massive vehicles increase the likelihood of accident victims sustaining severe or fatal injuries during an accident.
The laws governing semi-truck accidents vary significantly from those encompassing accidents involving other types of automobiles. Adding in driver responsibility, failure to follow protocols, and a lack of preparation– the capacity for damages increases immensely.
If you or a family member is injured in an accident caused by a semi-truck, it is crucial to contact Siegfried & Jensen as soon as possible to help you recover compensation for damages. 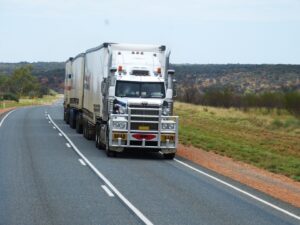 If you are ever involved in a semi-truck accident, it is crucial for you to file a claim to recover compensation for damages you incurred. Truck drivers are required to pay higher insurance rates, which ensure there is more money available to cover damages sustained by the aggrieved.
Working with a semi-truck accident lawyer will ensure you recover the maximum amount of compensation to cover your damages and injuries. There are several factors taken into consideration when determining the amount of compensation to award a semi-truck accident victim. Some of the most common compensation awards cover:
Medical Expenses: Individuals who are injured in semi-truck accidents often sustain catastrophic injuries. These injuries can require several surgeries and therapies and numerous doctor appointments. Some of the injuries victims sustain also require them to be in wheelchairs or use other medical equipment for several months or indefinitely. Injured claims can utilize the court system to recover compensation to cover all past, current, and future medical bills related to their injuries.
Physical Pain: In physical pain inflicted on semi-truck accident victims is unimaginable. These victims are often forced to endure constant and continual pain for months or the remainder of their lives. The pain from the injuries is often overwhelming and debilitating. These individuals are usually forced out of work because excruciating pain prevents them from functioning the way they did before their accident. The courts recognize how much of an impact physical pain has on the lives of accident victims. Individuals are able to recover compensation for the pain they are forced to suffer from resulting from their accidents.
Emotional Suffering: Physical pain often goes hand-in-hand with emotional suffering. Individuals injured in semi-truck accidents are forced to deal with physical pain every day. This takes an emotional toll on victims. Quite often, injured claimants suffer from depression, anxiety, and fear from their accident. They may feel hopeless and feel like they are never going to recover. They may feel like they are a burden to others simply because of their new physical limitations caused by the accident. These negative emotions are often overwhelming, leaving victims to grieve daily. Emotional suffering is a very real and unpleasant thing most injury victims deal with. Not only does their physical pain limit their abilities, but their emotional suffering leaves them unable to see better days ahead.
Lost Wages: Individuals who are injured in semi-truck accidents are often forced out of work to deal with their injuries. Whether they have to spend several weeks out of work to recover, have to miss work for medical appointments or surgeries, or they are forced out of work indefinitely, they may be able to recover compensation for their lost wages. In cases where injury victims are forced out of work permanently, an experienced attorney will hire a financial expert to calculate the lifetime earnings the injured claimant will miss out on due to their injuries.
Loss Of Enjoyment: Suffering injuries in a semi-truck accident can drastically limit what a person can do. They may not be able to walk ever again, or they may be required to use a brace or other medical devices to get around. They may even suffer from debilitating back pains that prevent them from walking or getting around as they did before their accident. Not being able to engage in activities accident victims enjoyed previously is a factor taken into consideration by the court.
Property Loss: Being involved in a semi-truck accident most likely results in the complete loss of a vehicle or other property. Injured claimants are able to recover compensation for the loss of their vehicles and to cover the loss of any property they had on them at the time of the accident.
Other Issues: There are several factors taken into consideration by courts in determining the amount of compensation awarded to injured claimants. One area of concern is whether the accident resulted from a driver acting extremely negligent while in control of their vehicle. The blatant disregard of the life and safety of others on the roadway can result in an award for punitive damages. Punitive damages do not have to prove a financial loss as compensatory damages do. Instead, they are awarded in addition to these or other general damages as a form of punishment to the driver for their wrongdoing.

At Siegfried & Jensen, we understand the physical, emotional, and financial burdens injured claimants are forced to deal with after a semi-truck accident, which is why we are determined to recover the maximum amount of compensation injury victims are entitled to for their accidents as quickly as possible.
Working with an experienced attorney will ensure you recover a full and fair amount of compensation for damages you sustain in a semi-truck accident. Quite often, damages go far beyond the physical and emotional suffering you are forced to endure due to another driver’s negligent acts. You should not be forced to pay extensive medical fees while being forced out of work to recover. Hire an attorney from Siegfried & Jensen to help you with your case by calling (801) 598-1218 or opening a chat on our website.