Particularly in larger urban areas, cyclists and motorists are wary of each other when traveling on the road. There are aspects of antagonism in the bicyclist driver relationship. Motorists are sometimes annoyed that cyclists ignore certain traffic laws, and bicycle riders often resent how some drivers are seemingly unwilling or unable to share the road. Despite the misconceptions, drivers and cyclists can both be held legally liable for causing traffic incidents.

The Law Is the Same for Cyclists

A cyclist is unique on the road. They operate a light vehicle with little protection under their own ability. They are also traveling around much larger and faster cars, putting them at potential risk. On the other hand, cyclists are required to follow many of the same rules of the road as other drivers. Cyclists have to avoid unsafe lane changes, yield to pedestrians, stay off sidewalks, and obey all other posted traffic signs.
In the event that a cyclist does not follow traffic laws and this results in an accident, the cyclist can be held responsible for injuries and other damages incurred by an involved party.

Same as other types of accidents, determining fault for a collision involving a bicycle and a motor vehicle is usually based on the concept of legal negligence. Put simply, this means anyone operating a vehicle on the roadway has an obligation of duty to act with reasonable care to protect others on the road. The failure to act with reasonable care, such as violating a traffic law, can be seen as negligence in the case that someone sustains injuries from the incident.
If there is an accident involving a car and bicycle at the intersection, a potential traffic violation by an involved party (like running a red light) will likely be a crucial factor in determining fault. In this case, the violating driver or bicyclist would be deemed the negligent party.
Outside of the concept of negligence to determine fault in a crash involving a bike and a car, all states have a version of the law which relies on shared fault, and this can affect the assessment of a personal injury claim.

Utah is like many states that have a system of comparative negligence when determining fault in an accident claim.
When using comparative negligence, each involved party in the incident recovers the percentage of their damages to the degree they were not at fault. This can be difficult to understand, so we have provided an example to clarify what this means.
Let’s say there is a cyclist named Lance. Lance is riding his bike through an intersection with a four-way stop when he is struck by another vehicle. Lance and the driver both were at fault for running a stop sign, but the driver of the car was speeding and legally intoxicated when the accident took place. Lance was just coasting through the intersection slowly and was perfectly sober. During a court trial, a jury determines that Lance was 20 percent at fault for causing the crash where the other driver was seen to 80 percent at fault. Let’s say Lance’s damages amounted to $200,000. That means he would be able to recover $160,000, equalling 80 percent of the total value.

Despite it seeming that legal situations are often on the side of cyclists, bike riders cannot overlook the importance of the physical world. Cars and motor vehicles are much larger in size in comparison to bikes, and they also offer much more protection to the driver.
This means that cyclists have to take even more action in order to avoid being involved in an accident. Cyclists should abstain from drinking and operating a bicycle. Statistics from the National Highway Traffic Safety Administration (NHTSA) reports that at least 20 percent of cyclists killed in fatal traffic accidents during 2013 had a blood alcohol concentration (BAC) of at least 0.08 or higher.
Cyclists should also attempt to remain visible to other drivers on the road, by wearing reflectors, installing flashing lights, and using lights to illuminate the roadway.
When it comes to injury prevention, a cyclist can run into issues regarding helmet laws in their state. If a bicyclist is not wearing a helmet in a state that requires them to wear one, they will experience issues seeking compensation for their injury claim. Utah does not require cyclists to wear helmets, but it still crucial in order to prevent injuries when riding a bicycle. If you are ever riding a bicycle, always wear a helmet in order to protect yourself from injury or death. An accident can happen at any time, and you need to take precautions to protect yourself. 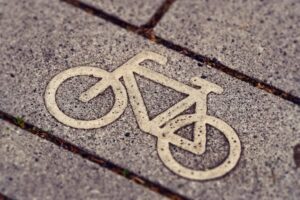 Each year in Utah, 372 cyclists are killed every year in traffic-related accidents. When a loved one dies, it is never an easy time, especially for family members and loved ones. You are not alone after the loss of a loved one. An experienced team of legal professionals can help you cover the cost of your damages and bring the at-fault party to justice.
When a family loses someone due to the negligence of another driver, it is crucial that they seek the counsel of a car accident lawyer in Utah. The surviving relatives have an opportunity to file a wrongful death lawsuit against the at-fault party to begin the healing process after a tragic loss.
The Salt Lake City personal injury lawyers at Siegfried & Jensen have three decades of experience helping victims of bicycle crashes receive justice after an accident. We understand the aftermath of these events and the anguish experienced by loved ones after a fatal crash. Because of this, we are ready to diligently serve them during these times. If you or a loved one has been harmed by a reckless or negligent driver, contact our law offices today at (801) 845-9000 in order to see how we can help your case.